Located in the centre of the Udeşti village, Suceava county, the memorial house was inaugurated in the year 1984, in Eusebiu Camilar’s house (1910-1965).  The memorial exhibition organized in the three rooms of the parental house reconstitutes the life and creative atmosphere presenting to the public a rich furniture collection, personal belongings and domestic items, books, personal documents, photographs, etc. 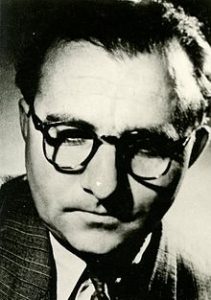 Eusebiu Camilar was born in Udeşti as the fifth child of seven of the family Ioan and Natalia (born Motrici), very poor peasants; ”The rushlight was during my time. It brought light in the house of the poor. My mother had our rushlight from our grandmother; and grandmother- from her mother. It was the bottom of a kettle from a shell splinter found by our ancester among some garbage at the skirt of the village. This is the way it was kept” (E. Camilar, Volcano). In 1914 his father emigrates to America, but after several years he returns as poor as he left: ”My father didn’t bring money from America. Some people would say he drank a lot. […] My mother quarreled him: You lost eight years in vain […] My mother brought us up. And we loved her. She protected us.” (E. Camilar, Cordun). Between 1918 and 1923 he attends The Folk School in the native village, then three years he attends Ştefan cel Mare High School of Suceava, after which he gives up going to school because of poverty; ”he was a pupil of an extremly high modesty and I can see him wearing our regional costume: white hemp shirt, homespun peasant trousers, long furred sheep coat, tricoloured belt…” (prof. Ştefan Pavelescu).

During 1928 and 1930 being extremly poor, he earns his living working as functionary assistant in the village, daily worker in agriculture, baker assistant in Iaşi, laundry cleaning boy, door keeper, boy doing coming and going things in Bucharest. He makes his first appearance in ”Literary Moldavia” with the poem My Fortress in 1929. Between 1931 and 1932 he is the editor of the review ”Beech land” edited by Constantin Milici in Soloneţ – Suceava and from 1932 until 1933 he is incorporated in the Suceava military police station, division Infantry, as trigger. In 1935 he settles down in Iaşi where he publishes in different reviews and newspapers: ”The Calling”, ”Iaşul”, ”The Will”, ”Moldavia’s fortress”, ”The world”, ”The leap”, etc; ”What this writer concerns, he reminds me of Gorki; in 1938 – when I met him – he was almost a tramp, anyway, a person living outside the law. He made his living from nothing, he read Jack London (Martin Eden) and had great admiration for My Confession” (Al. Piru). In 1937 he makes his first appearance with the verses The call of the hardships. In 1938 he marries the poet, the prose writer and the publicist Magda Isanos (1916-1944), living in indigence. In 1941 is born his only child, Elisabeta (Zuţa), the future poet, prose writer and translator Elisabeta Isanos.

The cultural site is closed for restoration

Find out more or adjust your settings.

This website uses cookies so that we can provide you with the best user experience possible. Cookie information is stored in your browser and performs functions such as recognising you when you return to our website and helping our team to understand which sections of the website you find most interesting and useful.

Strictly Necessary Cookie should be enabled at all times so that we can save your preferences for cookie settings.

If you disable this cookie, we will not be able to save your preferences. This means that every time you visit this website you will need to enable or disable cookies again.